This kind of operations can be performed not only by users, but also by banks. Such trading is worked through financial exchanges or brokerage platforms. Not all countries have a currency exchange; therefore, interbank trading is being used there, where different foreign currencies take part. And the operations that banks perform are a special kind of activity where the purchase and sale of currency takes place, as well as various calculations and possible loans. In such a trade may appear not only foreign, but also local currency. Such markets include operations that exceed $ 1 million. Operations with currency could be divided into two subcategories: urgent (that is, performed within a certain period of time) and cash. To the cash subcategory, we refer to currency purchase and sale for the exact terms of the organization that providing such service. 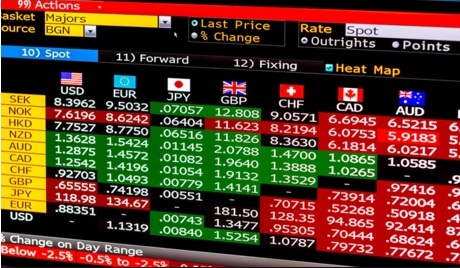 Most often the rate in the cash subcategory is fixed, that is, the one that is on the day of the deal. The currency purchase and sale can be carried out on the exchange by traders who close deals, predicting the indicator's behavior. They take currencies and look at its behavior in one area or another. In some cases, the Central Bank may refuse to control the course of exchange rate of certain national currency. The result may be a sharp not predictable jump, which leads to the loss of many traders. This is the situation that occurred with the Swiss franc in early 2015. Up to this, the financial question has been fairly stable. When the Bank stopped fixing its value, exchange rate could be dramatically changed. If the trade is carried out in Europe, then it starts at 9 am, and the trader chooses the tactics on his own. There are 10 most traded world currencies; these are certain currencies that most often participate in the deals for buying/selling. The deal could be closed for various reasons: it could be the economic country situation with the exact currency, fresh economic news, world conflicts and other important financial facts. The most used currencies are following:

It is also important to note that when banks, brokers systems or the government says about buying/selling currency on the different foreign markets, it does not mean that they take dollars and sell them for British pounds. Most trade deals are the purchase and sale of certain bank deposits denominated in various currencies. Thus, when we could say that the certain bank buys dollars at foreign market of exchange; this means that it buys deposits that are being denominated in US dollars. The volume of such market is huge and it exceeds 1 trillion dollars per day. The kind of market sphere where courses of exchange are used is not the kind of market where people could buy currency for your need, for example, trip abroad. You buy foreign currency at the retail market (from dealers/banks). Since retail prices exceed wholesale prices, you buy currency, but you receive less foreign currency per dollar and this would be not that amount that officially is in the trading company.